[hear-it.org] The medical drug sodium-thiosulfate has a relieving effect on young cancer patients suffering from hearing loss because of chemotherapy.

Strongest among the youngest

In the first group, the share of patients who experienced a hearing loss after the treatment was only 29%. For those in the second group, who were treated with cisplatin only, the number of patient who suffered from hearing loss was 56%.

A simple comparison of the two patient groups reveals a clear reduction in experienced hearing loss among patients. The treatment effects were significantly strong among children under 5 years old. This age group is also most susceptible to cisplatin-induced hearing loss.

As a part of the study, the cancer patients were all in all tested three times. Once before the chemotherapy treatment, once after initial treatment and finally after the treatments were completed. 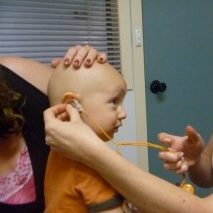