When sound enters the ear, it is detected by cells in the inner ear called hair cells. These hair cells (so-called because of the tiny hair-like projections on their surface) are vital to our ability to hear as they convert the pitch and loudness of sound into an electrical signal which is then sent to the brain. Hair cells can be lost during aging and damaged by trauma to the ear such as loud noises and toxic drugs. Following birth, all mammals lose the ability to regenerate hair cells meaning that any damage can lead to a permanent hearing loss. Interestingly birds and amphibians retain the ability to regenerate hair cells throughout their lives. These observations have led to a lot of research into how these regenerative pathways work and how they could be safely activated in people in order to “regrow” lost hair cells and restore hearing.

About 10 years ago a gene called Atoh1 was discovered which acts as a “switch” to turn on hair cell growth. In mammals the Atoh1 switch is turned off following birth but in birds and amphibians it remains on into adulthood. It was discovered that when Atoh1 is artificially switched on in the cells that support hair cells (called “supporting cells”) it instructs them to divide and form new hair cells. This led researchers to investigate whether Atoh1 could be used as a gene therapy to treat certain types of profound hearing loss. 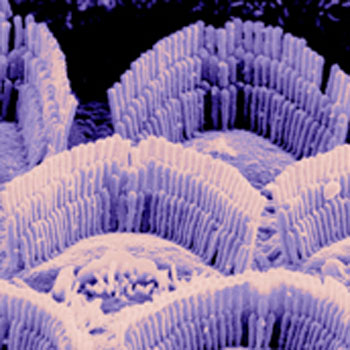