Spinster homolog 2 (Spns2) acts as a Sphingosine-1-phosphate (S1P) transporter in zebrafish and mice, regulating heart development and lymphocyte trafficking respectively. S1P is a biologically active lysophospholipid with multiple roles in signalling. The mechanism of action of Spns2 is still elusive in mammals. Here, we report that Spns2-deficient mice rapidly lost auditory sensitivity and endocochlear potential (EP) from 2 to 3 weeks old.

We found progressive degeneration of sensory hair cells in the organ of Corti, but the earliest defect was a decline in the EP, suggesting that dysfunction of the lateral wall was the primary lesion. In the lateral wall of adult mutants, we observed structural changes of marginal cell boundaries and of strial capillaries, and reduced expression of several key proteins involved in the generation of the EP (Kcnj10, Kcnq1, Gjb2 and Gjb6), but these changes were likely to be secondary.

Permeability of the boundaries of the stria vascularis and of the strial capillaries appeared normal. We also found focal retinal degeneration and anomalies of retinal capillaries together with anterior eye defects in Spns2 mutant mice.

Targeted inactivation of Spns2 in red blood cells, platelets, or lymphatic or vascular endothelial cells did not affect hearing, but targeted ablation of Spns2 in the cochlea using a Sox10-Cre allele produced a similar auditory phenotype to the original mutation, suggesting that local Spns2 expression is critical for hearing in mammals. These findings indicate that Spns2 is required for normal maintenance of the EP and hence for normal auditory function, and support a role for S1P signalling in hearing. 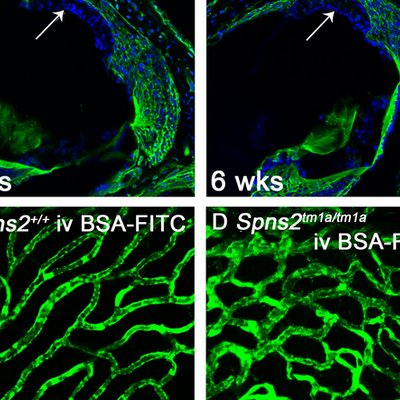