Born deaf, the toddler received cochlear implants seven months ago. He and his mother use FaceTime video chat to have hour-long sessions in Spanish with a speech therapist who is helping the boy learn how to listen and understand the new sounds

Skipping the three-hour commute to see a therapist is a huge help for the family, both financially and psychologically. Immigrant farm laborers from Oaxaca, Mexico, the boy’s mother can’t drive and his father doesn’t get paid for any time he takes off work.

The family is one of 25 taking part in a free program that uses iPads to connect children under three who have or are getting cochlear implants with a remote support network of professionals. They conduct regular speech therapy appointments over an iPad, track progress over email, and call in with questions about everything from tech support to family issues.

Called BabyTalk, the innovative program is part of a joint partnership between Stanford University and the Weingarten Children’s Center, a Redwood City, Calif., school for children who are deaf and hard of hearing. Funded by a $260,000 three-year grant, the program can serve up to 30 children at a time. It’s a test case for how telemedicine can make patient’s lives easier, save money, and bring specialized medical care to underserved and remote communities.

“Our whole program is based on the notion that we can intervene with technology, developing listening and cognitive skills,” said Kathy Sussman, Weingarten’s executive director.

In the first few hours of life, most babies born in the United States are given a mandatory hearing test. Quick, painless and inexpensive, the test is key to identifying hearing loss early so children can get the proper treatment, including cochlear implants. Babies can get the implant surgery as early as six months.

“Zero to three is your critical window,” said Jan Larky, the Stanford audiologist who works with the program. “If you give access to sound at the age of three, you’ve missed the boat.”

Cochlear implants deliver audio information directly to the auditory nerve, circumventing the damaged inner ear. The device has a removable piece on the outside, which contains a transmitter and microphone. It’s attached to the implant using magnets.

The implants don’t magically give someone regular hearing, but eventually help them process sound in a similar way. The children are getting sound information to their brain, but they need speech and language therapy to make sense of it.

“There’s so much work required post-implantation. Just because you have access to sound … you don’t know what those sounds mean,” said Margaret Farquhar, the Stanford social worker who helps BabyTalk families.

Watching and listening, miles away

“I am making corns,” says Dylan, a two-year-old in the BabyTalk program.
The words are clear and come easily to Dylan. His attempt to make “corn” plural has excited his therapist Jan Christensen, who is watching and listening from her computer at the WCC.

Dylan was one of the first children in the BabyTalk program. During a recent session, his parents, who live hours away, were talking to Christensen over their iPad while Dylan moved a train set the background, chiming in when asked a question.

Christensen marked down Dylan’s milestones and gave his parents suggestions for what to work on. She says his progress is comparable to kids she works with in person at Weingarten.

Dylan ends each session singing a goodbye song and blowing Jan kisses, and then his favorite part: pushing the button on the iPad that ends the call.

Christensen, whose son is deaf, has worked at Weingarden since 1999. She is one of 10 of speech therapists in the BabyTalk program who hold their sessions over FaceTime. Each family is given a free, specially modified iPad with a cellular plan. Stanford chose the device because Apple’s FaceTime video chat is encrypted and HIPPA compliant.

Christensen and the other therapists have had to change their approach with the different medium. Usually, a child would be in Christensen’s office, going through structured activities. Instead, these kids are in their own homes where they’re more relaxed. It can mean therapists get a clearer picture of how the child is progressing, but the kids can also be more distracted and difficult to pin down.

The therapists also rely much more on the parents to act as teachers themselves.
“We really are in the business of empowering parents to be effective language teachers for the children,” said Sussman.

They train them to act like radio commentators, constantly narrating and commenting on things that happen. To keep the children from depending on lip reading, the parents are instructed to stay out of view when talking. Many families can’t afford the Fisher Price toys used for in-person sessions, so the therapists help parents improvise with objects in their homes.

While Patricia Gomez, one of BabyTalk’s bilingual therapists, is video-chatting with a mom and child, baby Fernando begins crying. He’s come down with the flu, and he eventually curls up off screen and falls asleep.

Gomez doesn’t miss a beat and refocuses on parent education. Using cookie cutters as props, she walks Fernando’s mother through examples of conversations they can have in the kitchen. When making meals, she can describe each step of the process. Opening the fridge is an opportunity to practice sound-word associations by remarking “Brrrr, it’s cold.”

It’s what many parents do automatically with their hearing kids. But for parents of a baby who can’t hear, silence can become a bad habit they need to break.

One of BabyTalk’s newest patients Jase can’t hear, yet, but his mom is already practicing speaking and singing to him, cheerfully narrating her activities during a recent BabyTalk session. Ten-month-old Jase had his surgery last week and he’s in a six-week waiting period before his implants can be turned on.

Even though there are large physical distances, the relationships between BabyTalk staff and the families can become close.

“It’s very powerful to be in a family’s home every week. [Therapists] are witness to their realities, and an intimate type of relationship develops,” says Farquhar.

For families that are poor and in rural areas, navigating the medical system is daunting and they can feel isolated. BabyTalk staff fills in many of the gaps.

The family from Oaxaca primarily speaks Triqui, an indigenous language. They know enough Spanish to communicate, but there are still limitations, especially when it comes to understanding complicated medical details. Both parents only have a sixth-grade education.

“These therapists are acting as a lifeline for a lot of these families,” said Larky.
They are also training them to be their own activists. When an anxious parent called about a broken implant, their therapist talked them through calling tech support themselves. 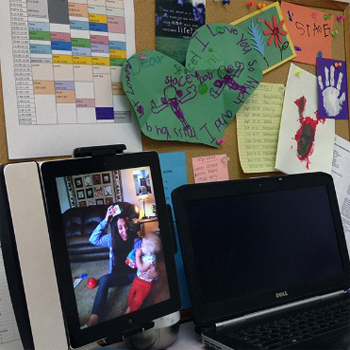