Abstract: During development of the zebrafish inner ear, regional patterning in the ventral half of the otic vesicle establishes zones of gene expression that correspond to neurogenic, sensory and non-neural cell fates. FGF and Retinoic acid (RA) signalling from surrounding tissues are known to have an early role in otic placode induction and otic axial patterning, but how external signalling cues are translated into intrinsic patterning during otic vesicle (OV) stages is not yet understood. FGF and RA signalling pathway members are expressed in and around the OV, suggesting important roles in later patterning or maintenance events. We have analysed the temporal requirement of FGF and RA signalling for otic development at stages after initial anteroposterior patterning has occurred. We show that high level FGF signalling acts to restrict sensory fates, whereas low levels favour sensory hair cell development; in addition, FGF is both required and sufficient to promote the expression of the non-neural marker otx1b in the OV. RA signalling has opposite roles: it promotes sensory fates, and restricts otx1b expression and the development of non-neural fates. This is surprisingly different from the earlier requirement for RA signalling in specification of non-neural fates via tbx1 expression, and highlights the shift in regulation that takes place between otic placode and vesicle stages in zebrafish. Both FGF and RA signalling are required for the development of the otic neurogenic domain and the generation of otic neuroblasts. In addition, our results indicate that FGF and RA signalling act in a feedback loop in the anterior OV, crucial for pattern refinement. 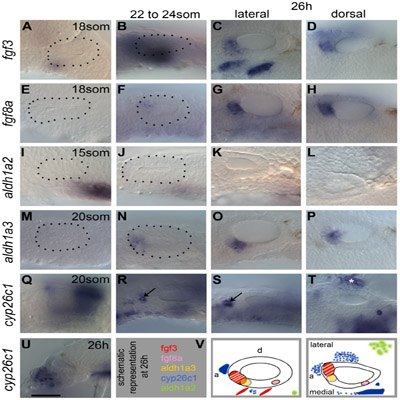