BACKGROUND: Whole-organ culture of the cochlea is a useful model system facilitating manipulation and analysis of live sensory cells and surrounding nonsensory cells. The precisely organized 3-D cochlear structure demands a culture method that preserves this delicate architecture; however, current methods have not been optimized to serve such a purpose.

METHODS: A protein-engineered ELP hydrogel was used to encapsulate organ of Corti isolated from neonatal mice. Cultured cochleae were immunostained for markers of hair cells and supporting cells. Organ of Corti hair cell and supporting cell density and organ dimensions were compared between the ELP and nonencapsulated systems. These culture systems were then compared with noncultured cochlea.

RESULTS: After 3 days in vitro, vital dye uptake and immunostaining for sensory and nonsensory cells show that encapsulated cochlea contain viable cells with an organized architecture. In comparison with nonencapsulated cultured cochlea, ELP-encapsulated cochleae exhibit higher densities of hair cells and supporting cells and taller and narrower organ of Corti dimensions that more closely resemble those of noncultured cochleae. However, we found compromised cell viability when the culture period extended beyond 3 days.

CONCLUSION: We conclude that the ELP hydrogel can help preserve the 3-D architecture of neonatal cochlea in short-term culture, which may be applicable to in vitro study of the physiology and pathophysiology of the inner ear. 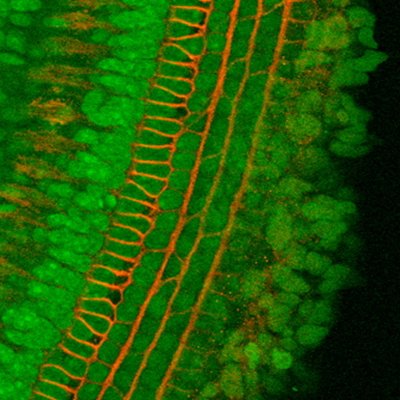