The cochlea contains the organ of Corti, the structure responsible for detecting sounds, and the basis of our ability to hear. There are two types of sensory cells in the organ of Corti, inner and outer hair cells, which transform sound energy into electrical signals. They do this through bundles of hair-like projections, called stereocilia, at the top of the cell, which are deflected when sounds, as vibrations, enter the cochlea and push on them. The hair cells ‘translate’ this into electrical signals, which are then passed on to the brain.

Stereocilia are arranged uniformly in these bundles in rows of graded height, and contain a core of densely packed filaments of a protein called actin, which align parallel to each other up the centre of the ‘hair’. Many other proteins bind to and interact with these actin filaments and are known to be essential for correct stereocilia development and maintenance. Absence or mutation of these proteins can lead to deafness. In our recent paper, we investigated the role of one of the most abundant proteins in stereocilia, called plastin 1, which binds to actin, but whose role  has never been directly assessed previously. 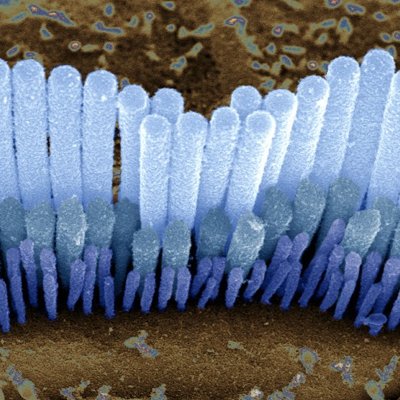