A study published this week in Nature Communications by the Cheng Lab, describes the discovery of progenitor cells that regenerate hair cells in the vestibular organ, and the mechanisms of regeneration

This is an important step in the research to create regenerative therapies for curing hearing loss. Inner ear hair cells, in humans and other mammals, once damaged do not regenerate thus causing permanent hearing loss. However, Dr. Cheng and his lab have found specific cells in the mammalian utricle which sense motion and which, when damaged, can regenerate lost hair cells. Importantly, these new hair cells display key features of functional hair cells, such as hair bundles and synapses.

The findings also include the discovery of the mechanism that causes this regeneration. The understanding of this mechanism could be used to create ways to cause hair cell regeneration in the human ear.

As described in the introduction to this paper – injury to tissues of the body activates progenitor cells to regenerate into the type of cells damaged. This type of regeneration can be seen in: skin, feathers, scales, hooves and nails, which generally regrow when damaged, as well as in intestinal systems. However, the inner ear hair cells within the mammalian cochlea do not have the ability to regenerate after damage from, for instance, a chemical or noise exposure. The mammalian utricle however, as discovered by others and now further characterized by the Cheng Lab, has a limited capacity to regenerate.

As Dr. Cheng explained to Tracie White for the Scope Blog:

Wnt signalling plays essential roles in the regulation of tissue homoeostasis by directing self-renewal of somatic stem cells. Lgr5 is a Wnt target gene that marks somatic stem cells in self-regenerating organs as well as progenitor cells recruited in the damaged liver and pancreas. In some tissues, injury upregulates Wnt signalling, which in turn promotes repair.

Until now that roles of Wnt-responsive cells after damage to the utricle and whether Wnt/ß-catenin signalling could promote hair cell regeneration in the utricle were unknown. With this paper the Cheng Lab notes the presence of, “Lgr5+ SCs (supporting cells) in the striolar region of the utricle after hair cell loss in vitro and in vivo” and concludes that Lgr5 supporting cells become hair cell progenitors in the mammalian utricle.

Dr. Heller describes that significance of these findings:

We have known since the early 1990s that the mouse vestibular sensory epithelia have a limited ability to regenerate hair cells. The somatic stem cells responsible for this regenerative capacity have been described by a number of studies in recent years and it became evident that the vestibular epithelia of neonatal (newborn) mice have significantly higher capacity, perhaps by harboring more cells with stem cell features.
Alan Cheng’s group made use of a stem cell marker gene called Lgr5 and they found that damage leading to loss of hair cells in the mouse vestibular system triggers up regulation of the Lgr5 gene in supporting cells. This, in turn, appeared to increase the potential of these cells to engage in the regenerative process.

“With the identification of these hair cell progenitors that naturally regenerate,” Cheng says, “an important next step is to decipher their molecular signatures which might hold the key to mammalian hair cell regeneration”.

Heller says, “This is advancing the field because it identifies an early response mechanism in the inner ear that ultimately leads to regeneration. It is an important finding.” 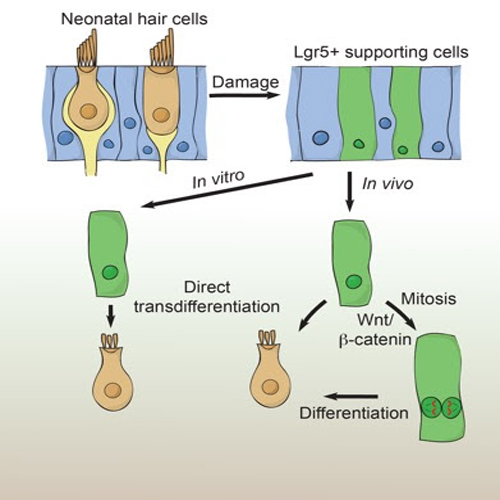