Hearing loss and balance disorders affect millions of people worldwide. Sensory transduction in the inner ear requires both mechanosensory hair cells (HCs) and surrounding glia-like supporting cells (SCs). HCs are susceptible to death from aging, noise overexposure, and treatment with therapeutic drugs that have ototoxic side effects; these ototoxic drugs include the aminoglycoside antibiotics and the antineoplastic drug cisplatin. Although both classes of drugs are known to kill HCs, their effects on SCs are less well understood. Recent data indicate that SCs sense and respond to HC stress, and that their responses can influence HC death, survival, and phagocytosis. These responses to HC stress and death are critical to the health of the inner ear. Here we have used live confocal imaging of the adult mouse utricle, to examine the SC responses to HC death caused by aminoglycosides or cisplatin. Our data indicate that when HCs are killed by aminoglycosides, SCs efficiently remove HC corpses from the sensory epithelium in a process that includes constricting the apical portion of the HC after loss of membrane integrity. SCs then form a phagosome, which can completely engulf the remaining HC body, a phenomenon not previously reported in mammals. In contrast, cisplatin treatment results in accumulation of dead HCs in the sensory epithelium, accompanied by an increase in SC death. The surviving SCs constrict fewer HCs and display impaired phagocytosis. These data are supported by in vivo experiments, in which cochlear SCs show reduced capacity for scar formation in cisplatin-treated mice compared with those treated with aminoglycosides. Together, these data point to a broader defect in the ability of the cisplatin-treated SCs, to preserve tissue health in the mature mammalian inner ear. 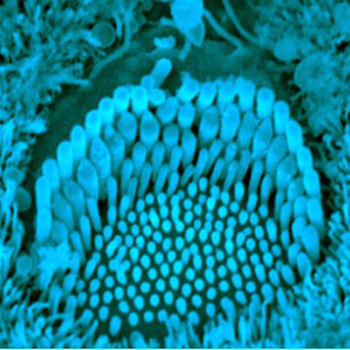