The Outcomes of Children with Hearing Loss (OCHL) project is a multi-center longitudinal study designed to measure the language and auditory outcomes of 317 children who were 6 months to 7 years old at the time of study recruitment and had a better-ear, pure-tone average of 25 to 75 dB HL. The OCHL study is led by a group of prolific researchers at Boystown National Research Hospital, the University of Iowa, and the University of North Carolina. Like the Longitudinal Outcomes of Children with Hearing Impairment (LOCHI) study (discussed in The Hearing Journal’s June 2016 issue), the OCHL is rife with important findings that should influence the work of pediatric audiology professionals. Here are some of the most relevant OCHL findings.

9. Morphology Matters. The OCHL study found that hard-of-hearing children experience delays in understanding the morpho-syntactic properties of the English language. Specifically, OCHL researchers highlighted the difficulty of hearing-impaired children have with the concept of bound morphemes—linguistic units that must accompany another morpheme/word. Examples are /s/ used to indicate possessiveness (e.g., cat’s meow), plurality (e.g., three cats), and third person singular present tense (e.g., the cat sleeps), and /t/ to indicate irregular past tense (e.g., the cat slept). Bound morphemes, which often represent important cues pertaining to the meaning of words, are often comprised of acoustic information that is vulnerable to the effects of hearing loss. For instance, the /s/ is a high-frequency phoneme, and the /t/ often contains low-level acoustic energy.

The OCHL findings should encourage audiologists to be especially attentive to certain aspects of the intervention that may support the development of morpho-syntactic abilities. Real ear probe microphone testing should indicate sufficient audibility for low-level speech throughout the speech-frequency range. Also, speech-language pathologists should pay attention to a child’s morpho-syntactic abilities and offer specific intervention as needed.

7. Give Them an Earful. Ambrose, et al., examined the quantity and quality of caregivers’ linguistic input to children who are hard-of-hearing (Ear Hear. 2015;36[01]:48S). They found that the parents used fewer and less complex words when speaking with their hearing-impaired children compared with parents of children with normal hearing. They also found that the quality (i.e., sophistication, level, length, etc.) of the parents’ language was directly proportional to the children’s language development at 3 years of age. The parents of children with hearing loss were more likely to use brief, directive statements (e.g., “Stop that!”), whereas the parents of children with normal hearing were more likely to use more complex, abstract language (e.g., “Oh, I don’t think the puppy likes that. He looks scared, let’s please be easy when we pet her. See how she likes this.”). As such, it is imperative to expose children to a rich and robust model of elaborate, intelligible speech. Listening and spoken language specialists should coach parents and caregivers to provide children with high-quality linguistic input and engage them in positive interactions.

6. Finally, an Answer to a Pressing Question. We have lost count of the number of times that parents have asked us if the use of hearing aids will cause their child to lose more hearing. McCreery and OCHL colleagues have provided us with a comforting answer to that important question (J Am Acad Audiol. 2016;27[3]:252). They studied hearing thresholds over time in a group of 213 children in the OCHL study. These children were fitted with hearing aids with the output level matched to DSL 5.0 targets. McCreery and colleagues found only a small shift in hearing thresholds over a two- to four-year period, and that change corresponded to the change in the RECD that occurs as a child’s ear grows over time. Specifically, as a child’s ear grows, the RECD decreases, and as a result, the audiometric dial level (in dB HL) required to achieve a given sound pressure level at the ear drum (dB SPL at the ear drum) increases. It is important to clearly point out that although the child’s threshold in dB HL may increase, the true hearing threshold in dB SPL at the ear drum does not change. As a result, if children are fitted with hearing aids that are verified to produce an acoustic output that is matched to a prescriptive target (i.e., DSL 5.0 for children, NAL-NL2), then no amplification-induced hearing loss is expected to occur.

5. Give Me 5 (But No More)! McCreery, et al., examined the characteristics of hearing aid fittings for 195 infants and young children with mild to severe hearing loss (Ear Hear. 2013;34[6]:701). Proximity of the children’s hearing aid output to DSL 5.0 prescriptive targets was measured at 500, 1,000, 2,000, and 4,000 Hz. McCreery, et al., found that more than half (55%) of the young children in the OCHL study were using at least one hearing aid that produced an output that deviated from DSL target by more than 5 dB on average. Of note, the hearing aids of the overwhelming majority of children evaluated at the University of North Carolina (UNC) were fitted within +/- 5 dB of DSL targets. These children generally get hearing aid services at UNC from audiologists who adhere to strict protocols on fitting hearing aids to prescriptive targets (American Academy of Audiology Pediatric Amplification Practice Guidelines, 2013). The children in other OCHL programs were fitted at various clinics across the United States. Because the fitting protocols (or lack thereof) in many of these clinics were variable, the children were more likely to have hearing aids that deviated by more than 5 dB from DSL targets. The differences observed among these different clinics underscore the importance of adhering to evidence-based fitting protocols. When fitting hearing aids for infants and children, the pediatric audiologist should strive to “give me 5 and no more!” An absolute standard of care should be to complete real ear probe microphone testing and match hearing aid output to prescriptive target (with no more than 5 dB of deviation).

4. More Work to Do. In many ways, the results of the OCHL study are quite positive because the children typically got better outcomes than those in studies conducted prior to the implementation of newborn hearing screening and the provision of modern pediatric hearing health care. Most of the children in the OCHL project got standard scores that were at or above the normal range for norm-referenced standardized speech and language assessments. However, Moeller and OCHL colleagues are quick to point out that there’s still much work to do. The outcomes of children with hearing loss were typically poorer than the outcomes of a control group of age- and SES-matched children with normal hearing. Many of the children in the OCHL study likely represent a best-case scenario because they have ready access to early intervention and ample resources. As a result, the children may have been predisposed to perform at or above the norm on standardized measures. When the outcomes of children with hearing loss were compared with the control group, it did appear that mild-to-severe hearing loss continues to hamper speech and language development.

What should we take away from these findings? First, children with any degree of hearing loss are at risk for speech and language delays, so early, intensive auditory-based intervention is critical to mitigating the potential deleterious effects of hearing loss. Second, pediatric hearing health care professionals must establish a high bar of performance for which to strive when attempting to optimize the outcomes of children with hearing loss. Through expeditious and effective intervention, the OCHL study showed that excellent outcomes are possible for hearing-impaired children.

3. Johnny-on-the-Spot! Fortunately, the U.S. federal government recently reauthorized the Early Hearing Detection and Intervention (EHDI) Act through the fiscal year 2022. To ensure that EHDI programs are sustained by federal funding for years to come, the pediatric hearing health care profession must continue to provide evidence demonstrating the critical importance and benefit of early identification of and intervention for hearing loss. Tomblin and OCHL colleagues found that children who were fitted early with hearing aids achieved higher language outcomes than those fitted later (Ear Hear. 2015;36 Suppl 1:76S). Moeller, et al., summed up the advantage of early access to hearing aids: “Children fit with hearing aids in infancy were either protected from falling behind or caught up to children with normal hearing before the age of 2 years old (Ear Hear. 2015;36 Suppl 1:92S).” The results of the LOCHI and OCHL studies are consistent and clear: Early identification and intervention result in significantly better outcomes for children with hearing loss.

1. Audibility is King. Let it Reign! Using routine real ear probe microphone measures and a comparison of hearing aid output to DSL 5.0 prescriptive targets, the OCHL study systematically evaluated the effects of aided audibility on auditory and language outcomes. In our humble opinion, the OCHL study provide the most compelling and impressive evidence to date of the importance of well-fitted hearing aids for children with hearing loss. Is it important for clinicians to closely fit children’s hearing aids to a research-based prescriptive targets? The OCHL study results provide the resounding answer, “YES!”

McCreery and OCHL colleagues reported that aided audibility (in the form of the aided Speech Intelligibility Index [SII] score as measured via real ear probe microphone measurement) was positively correlated with word recognition in quiet, speech recognition in noise and parent report of auditory skill development (Ear Hear. 2015;36[0 1]:60S). Likewise, Tomblin, et al., reported that the language outcomes of children with aided SII scores in the upper quartile were almost one standard deviation higher than children whose aided SII scores were in the lowest quartile (Ear Hear. 2015;36 Suppl 1:76S). Optimal audibility is the foundation upon which solid auditory and spoken language abilities are developed. Once again, the standard of care calls for pediatric audiologists to complete real ear probe microphone measures and match the output of each child’s hearing aids to prescriptive targets. Audibility is king. Let it reign! 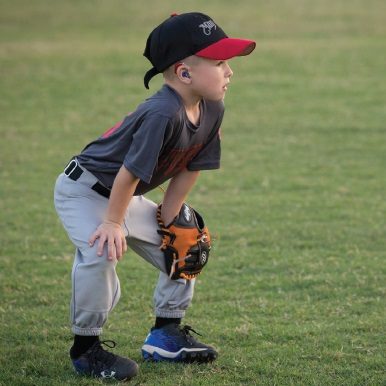