News & Events
December 15, 2014
Identifying MicroRNAs Involved in Aging of the Lateral Wall of the Cochlear Duct

Abstract: Age-related hearing loss is a progressive sensorineural hearing loss that occurs during aging. Degeneration of the organ of Corti and atrophy of the lateral wall of the cochlear duct (or scala media) in the inner ear are the two primary causes. MicroRNAs (miRNAs), a class of short non-coding RNAs that regulate the expression of mRNA/protein targets, are important regulators of cellular senescence and aging. We examined miRNA gene expression profiles in the lateral wall of two mouse strains, along with exploration of the potential targets of those miRNAs that showed dynamic expression during aging. We show that 95 and 60 miRNAs exhibited differential expression in C57 and CBA mice during aging, respectively. A majority of downregulated miRNAs are known to regulate pathways of cell proliferation and differentiation, while all upregulated miRNAs are known regulators in the pro-apoptotic pathways. By using apoptosis-related gene array and bioinformatic approaches to predict miRNA targets, we identify candidate miRNA-regulated genes that regulate apoptosis pathways in the lateral wall of C57 and CBA mice during aging. 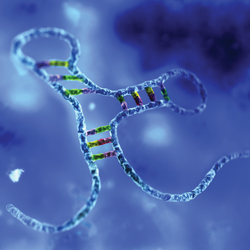