[Hear-it.org] American researchers have proven that the brain reorganises itself when ones hearing fails. The brain changes with even the slightest hearing loss.

Through scans, researchers at the University of Colorado, Boulder in the US have found that our brain changes if we have a hearing loss.

The research was carried out by, among others, professor Anu Sharma, Dept. of Speech, Language and Hearing Sciences Institute of Cognitive Science Center for Neuroscience University of Colorado at Boulder.

Scans of the brain

”Even at this stage, the reorganisation is happening. We can see that the worse speech comprehension is, the more the other senses take over. It is food for thought, as many have signs of reduced hearing around the age of 40,” says professor Anu Sharma to the Hørelsen, the magazine for the Danish union for the hard of hearing, Høreforeningen.

The brain is plastic

According to Anu Sharma, the brain is plastic and it is common knowledge that with deafness, the auditory area uses other senses.

Researchers could see through their studies that the brain’s frontal lobe has to work hard when people with hearing loss hear sounds.

“Even when the participants did not have to do anything other than listen to sounds, you could see that the frontal lobe, where working memory lies, was activated. Even people with a mild hearing loss have to work hard, are constantly focused and become tired. There is a constant cognitive load and you use a lot of resources,” says professor Anu Sharma to the magazine Hørelsen.

Professor Anu Sharma said to the magazine that a smaller study has shown that 30 days’ use of hearing aids can change the brain to that of a normal hearing person. However, the study underlines that it is important that the hearing aid fits well and is used all of the time.

Professor Anu Sharma was interviewed by the magazine Hørelsen in the spring in connection with a conference at Centre for communication and welfare technology in Odense, Denmark. 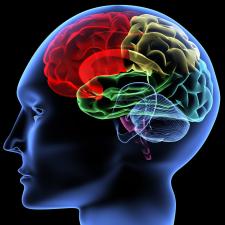