[Action on Hearing Loss] Researchers in Boston have used improved gene therapy to restore hearing in mice – enough to be able to hear a whisper. The mice have a particular type of Usher syndrome, a condition which causes profound hearing loss (alongside vision loss) in those affected. Carina, from the Biomedical Research team of Action on Hearing Loss, has blogged about the findings, and what this might mean for using gene therapy to treat hearing loss in people.

ANOTHER STEP FORWARD FOR GENE THERAPY TO TREAT HEARING LOSS
Researchers from Harvard Medical School in the US have recently used gene therapy to restore hearing in mice with a particular type of Usher syndrome. Carina Santos, Translational Research Manager of “Action on Hearing Loss” tells us more about the work, and what it means for using gene therapy to treat hearing loss in people in the future.

Genes are the master regulators of the characteristics that make us human, from the colour of our eyes to the number of toes we have in each foot, and our hearing is no exception!

Over half of the cases of hearing loss in children worldwide are due to errors in genes called mutations. In fact, hearing loss acquired during aging can also be influenced by our genetic make-up. Scientists around the world are working hard to develop gene therapies to correct the mutations that cause hearing loss. Two recent advances made by researchers at Harvard Medical School in the US have brought the prospect of gene therapies for hearing loss closer.

The cochlea is the “hearing” part of the ear, where the sensory hair cells are located. These cells are responsible for translating sound into electrical signals that are sent to the brain, allowing us to hear. So, genetic mutations that affect the way these cells develop or work are likely to cause hearing loss. Scientists working on gene therapy to correct gene mutations in hair cells face the substantial challenge of how to deliver corrected genes to the large number of sensory hair cells in the cochlea, which is hard to access, as it is hidden behind the mastoid bone in our skull, the hardest bone in the body.

The research, published this month in the scientific journal Nature Biotechnology, presents a new and highly efficient method of delivering corrected genes to 80-90% of sensory hair cells, using a new viral vector called Anc80L65. A viral vector is a harmless virus that scientists engineer to infect specific cells and deliver genes into them. Anc80L65 surpasses existing vectors because its high efficiency allows delivery of genes to different types of hair cells (called inner and outer hair cells), which have complementary and essential roles in the hearing process, as well as vestibular hair cells, which control balance and spatial orientation.

How gene therapy restored hearing and balance in a mouse model

Usher syndrome is a genetic disorder that causes profound deafness, blindness and balance disorders. It is responsible for 3-6% of childhood deafness. In a specific type of Usher syndrome, called type 1c, a gene called USH1C is defective, which results in hair cells failing to develop correctly, showing disorganized hair bundles (the hair-like structures on top of the cells that sense sound, and that give hair cells their name), and then dying. In this study, the researchers used mice which have the same mutation in their version of the USH1C gene, which is called Ush1c (naming conventions for genes mean that mouse genes are in lower case, while human genes are capitalised).

By introducing a corrected version of the Ush1c gene into the inner ear of newborn mice, using the Anc80L65 vector, the researchers were able to restore the correct organization of the hair bundles and improve hearing in the mice by over a thousand-fold, relative to other existing inner ear gene therapy approaches. Along with hearing, balance was also restored in these mice. Although it’s still early days, gene therapy shows promise as a treatment to restore hearing and studies like these are helping to speed up access to these therapies by people.

The researchers are now focussed on perfecting the Anc80L65 vector, to limit the delivery of genes to hair cells only. Moreover, although the therapy showed the highest efficiency when used in newborn mice, the best therapeutic window for humans is still to be determined. Unlike in mice, human hearing is fully developed before birth and researchers need to assess if gene therapy would have to be given pre-natally, which would be a significant challenge, or if it will work if administered after birth. 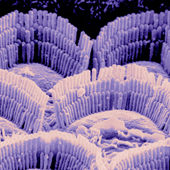