Genome editing has been used to reduce hearing loss in ‘Beethoven’ mice, which carry a mutation that causes deafness in both mice and humans.

The research relies on a technique called CRISPR–Cas9 to knock out a mutant form of the gene Tmc1. In doing so, it lays out a potential pathway for treating other genetic causes of hearing loss. It also addresses a major problem facing the field of genome editing: how to deliver the protein and RNA needed for the CRISPR–Cas9 technique into the cells of a living animal.

In this case, the researchers encapsulated the CRISPR components in positively charged fatty molecules called lipids, which are capable of crossing cell membranes. They then injected those particles directly into the inner ears of the mice, where the lipids were taken up by the hair cells that sense acoustic vibrations. The results are reported this week in Nature (X. Gao et al. Naturehttp://dx.doi.org/10.1038/nature25164; 2017).

The method could be used to enable gene therapy in people, if additional testing shows it to be safe and effective, says David Liu, a chemical biologist at the Broad Institute of MIT and Harvard in Cambridge, Massachusetts, and a lead author of the study.

That could be an important step forward, says bioengineer Charles Gersbach of Duke University in Durham, North Carolina. “The vast majority of papers that you see where they’re using CRISPR to correct a mutation in an animal model, they are using delivery systems that aren’t applicable to treating diseases in humans,” he says. “Delivery is still a challenge.”

CRISPR–Cas9 gene editing uses the Cas9 enzyme to cut DNA at a site dictated by the sequence of a snippet of RNA, called a guide RNA. To edit genes in the cells of living animals, researchers often use viruses to shuttle in the DNA that encodes Cas9 and the guide RNA. Once inside the cell, the DNA is expressed and the cell produces both components.

But those viruses have been carefully engineered for classical gene therapy, in which they are used to express a normal copy of a particular gene at high levels and for as long as possible. Researchers who are editing genomes instead prefer that Cas9 is expressed for just enough time to make its targeted change — and that it doesn’t hang around long enough to raise the risk of undesired changes.

This was particularly important for the Beethoven mice, because the animals carry one mutated copy and one normal copy of the Tmc1 gene. The two versions differ by only a single DNA letter, and Liu’s team wanted Cas9 to disable the mutated copy — not the normal one. Rather than use a virus, Liu’s team injected the lipid-encased Cas9 protein bound to its guide RNA into one ear of each mouse and then tested the hearing in each ear up to eight weeks later.

In all the tests, mice with treated ears performed better than control mice that had not been injected with the gene-editing components. For example, eight weeks after the injection, untreated control mice did not react to an abrupt 120-decibel noise — roughly the volume of a rock concert or a chainsaw. Mice that received the treatment, however, were significantly startled by the noise.

“This is a nice extension of previous work,” says Daniel Anderson, a biomedical engineer at the Massachusetts Institute of Technology in Cambridge. The ability to selectively knock out the mutant form of the gene, despite a difference of just one DNA letter between it and the normal form, highlights the potential of CRISPR–Cas9 gene editing, he notes.

It will take further tests in animals and people before it will be clear whether the same approach could work for humans who have TMC1mutations. (Liu is co-founder of the company Editas Medicine, also in Cambridge, which aims to develop therapies that harness CRISPR–Cas9 to treat genetic disorders.) Liu’s lab is also hoping to test the technique in the eye, to tackle genetic causes of blindness.

The Cas9 protein and its guide RNA are unlikely to travel far from the site of injection, making the approach ill-suited to treating conditions such as muscular dystrophy, which affect large swathes of tissue.

“The delivery method very much needs to be catered to the exact disease and what cells you’re delivering to,” says Gersbach, who advises Editas. “This work is a step in that direction.” 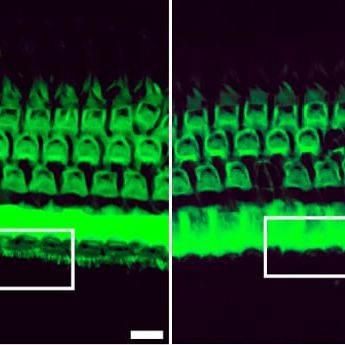