Once the vibrations of the eardrum have been transmitted to the oval window, the sound waves continue their journey into the inner ear.

The inner ear is a maze of tubes and passages, referred to as the labyrinth. In the labyrinth can be found the vestibular and the cochlea.

In the cochlea, sound waves are transformed into electrical impulses which are sent on to the brain. The brain then translates the impulses into sounds that we know and understand.

What is the cochlea and what is the function of the cochlea? The cochlea resembles a snail shell or a wound-up hose and is filled with a fluid called perilymph and contains two closely positioned membranes. These membranes form a type of partition wall in the cochlea. However, in order for the fluid to move freely in the cochlea from one side of the partition wall to the other, the wall has a little hole in it (the helicotrema). This hole is necessary, in ensuring that the vibrations from the oval window are transmitted to all the fluid in the cochlea.

When the fluid moves inside the cochlea, thousands of microscopic hair fibres inside the partition wall are put into motion. There are approximately 24,000 of these hair fibres, arranged in four long rows.

The vestibular – the balance mechanism

The vestibular consists of three ring-shaped passages, oriented in three different planes. All three passages are filled with fluid that moves in accordance with the body’s movements. In addition to the fluid, these passages also contain thousands of hair fibres which react to the movement of the fluid sending little impulses to the brain. The brain then decodes these impulses which are used to help the body keep its balance. 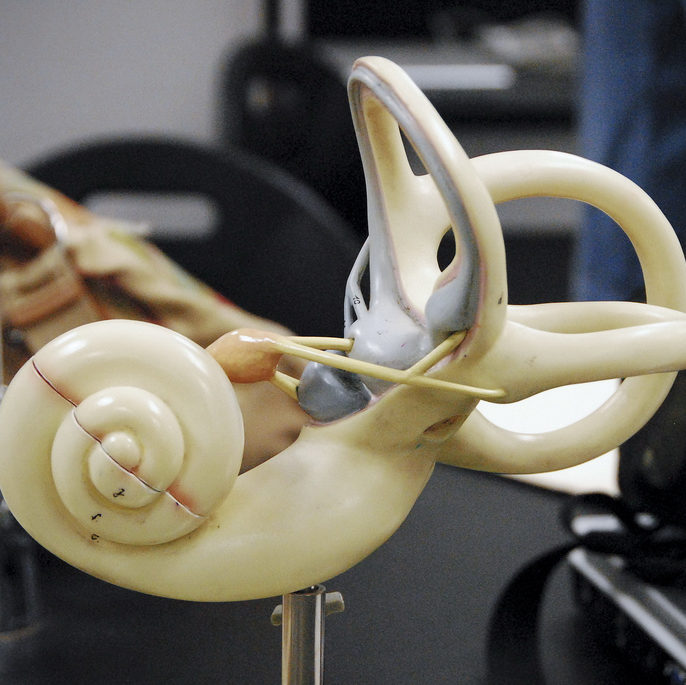