Being a musician is a huge risk factor in relation to hearing loss. More than 40% of musicians in the United Kingdom experience problems with their hearing and 75% also experience tinnitus, a survey finds (Via: www.hear-it.org)

Hearing loss is a fairly normal condition among musicians in the UK. A survey involving 692 musicians aged 18-75 in the United Kingdom found that 40.5% of the respondents experienced hearing loss. Of those who complained of hearing loss, 75% said they experience tinnitus and more than one in five experience hypersensitivity to noise (hyperacusis).

Hearing is critical for musicians and the impact of losing it can be a profound and sensitive issue as musicians rely on their hearing. 78.3% of survey respondents admit that being a musician is one of the factors causing hearing loss and 50% said that they have sought professional help for their hearing loss.

Among those who had not sought professional help for their hearing loss, the reasons given are that they believe hearing problems are an unavoidable when being a musician.

Not all musicians use hearing protection

Despite the fact that 81% of all respondents believe that musicians should use hearing protection, only two out three said that they did.

Those who don’t use hearing protection gave different reason for this. 38% mentioned cost in their response, while others referred to the hearing experience being compromised, their playing or singing being affected or the fact that they do not find it practical using protection.

Several British musicians have been open about their hearing loss, as they wish for others to prevent hearing problems by using hearing protection. Pete Townshend, the famous songwriter and guitarist of the rock band The Who, suffers from hearing loss and tinnitus in both ears, which is thought to be the result of loud noise exposure from performing at concerts and wearing earphones in the music studio while recording.

Chris Martin, lead singer for Coldplay, has suffered from tinnitus for over 10 years. “Since I started protecting my ears it hasn’t got any worse […] But I wish I’d thought about it earlier. Now we always use molded filter plugs, or in-ear monitors, to try and protect our ears”, he previously told Action on Hearing Loss.

The former Oasis star Noel Gallagher has also been diagnosed with tinnitus.

The survey was conducted by the charity Help Musicians UK. 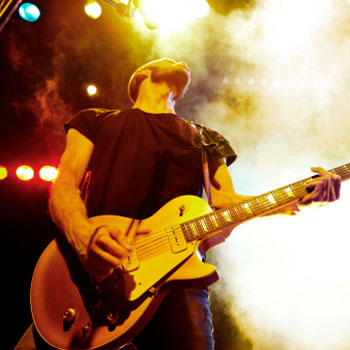