[Action on Hearing Loss] Read about recent research from the US, which has uncovered a new way to re-grow hair cells in the lab – and which could, one day, help restore lost hearing.

Within the inner ear, thousands of hair cells detect sound waves and translate them into nerve signals that allow us to hear speech, music, and other everyday sounds. Damage to these cells is one of the leading causes of hearing loss, which affects 48 million Americans.

Each of us is born with about 15,000 hair cells per ear, and once damaged, these cells cannot regrow. However, researchers at MIT, Brigham and Women’s Hospital, and Massachusetts Eye and Ear have now discovered a combination of drugs that expands the population of progenitor cells (also called supporting cells) in the ear and induces them to become hair cells, offering a potential new way to treat hearing loss.

“Hearing loss is a real problem as people get older. It’s very much of an unmet need, and this is an entirely new approach,” says Robert Langer, the David H. Koch Institute Professor at MIT, a member of the Koch Institute for Integrative Cancer Research, and one of the senior authors of the study.

Lead authors are Will McLean, a recent PhD recipient at the Harvard-MIT Division of Health Sciences and Technology, and Xiaolei Yin, an instructor at Brigham and Women’s and a research affiliate at the Koch Institute. Other authors are former MIT visiting student Lin Lu, Mass Eye and Ear postdoc Danielle Lenz, and Mass Eye and Ear research assistant Dalton McLean.

Noise exposure, aging, and some antibiotics and chemotherapy drugs can lead to hair cell death. In some animals, those cells naturally regenerate, but not in humans.

The research team began investigating the possibility of regenerating hair cells during an earlier study on cells of the intestinal lining. In that study, published in 2013, Karp, Langer, Yin, and others reported that they could generate large quantities of immature intestinal cells and then stimulate them to differentiate, by exposing them to certain molecules.

During that study, the team became aware that cells that provide structural support in the cochlea express some of the same surface proteins as intestinal stem cells. The researchers decided to explore whether the same approach would work in those supporting cells.

They exposed cells from a mouse cochlea, grown in a lab dish, to molecules that stimulate the Wnt pathway, which makes the cells multiply rapidly.

“We used small molecules to activate the supporting cells so they become proliferative and can generate hair cells,” Yin says.

At the same time, to prevent the cells from differentiating too soon, the researchers also exposed the cells to molecules that activate another signaling pathway known as Notch.

Once they had a large pool of immature progenitor cells (about 2,000-fold greater than any previously reported), the researchers added another set of molecules that provoked the cells to differentiate into mature hair cells. This procedure generates about 60 times more mature hair cells than the technique that had previously worked the best, which uses growth factors to induce the supporting cochlea cells to become hair cells without first expanding the population.

The researchers found that their new approach also worked in an intact mouse cochlea removed from the body. In that experiment, the researchers did not need to add the second set of drugs because once the progenitor cells were formed, they were naturally exposed to signals that stimulated them to become mature hair cells.

“We only need to promote the proliferation of these supporting cells, and then the natural signaling cascade that exists in the body will drive a portion of those cells to become hair cells,” Karp says.

Because this treatment involves a simple drug exposure, the researchers believe it could be easy to administer it to human patients. They envision that the drugs could be injected into the middle ear, from which they would diffuse across a membrane into the inner ear. This type of injection is commonly performed to treat ear infections.

Some of the researchers have started a company called Frequency Therapeutics, which has licensed the MIT/BWH technology and plans to begin testing it in human patients within 18 months.

Jeffrey Holt, a professor of otolaryngology and neurology at Boston Children’s Hospital and Harvard Medical School, says this approach holds potential for treating hearing loss, if its safety and effectiveness can be demonstrated.

“The ability to promote proliferation of inner-ear stem cells and direct their maturation toward an auditory hair cell fate is an important advance that will accelerate the pace of scientific discovery and facilitate translation of regenerative medicine approaches for restoration of auditory function in patients with acquired hearing loss,” says Holt, who was not involved in the research.

The researchers also hope their work will help other scientists who study hearing loss.

“Drug discovery for the inner ear has been limited by the inability to acquire enough progenitor cells or sensory hair cells to explore drug targets and their effects on these cell types,” McLean says. “We hope that our work will serve as a useful tool for other scientists to more effectively pursue studies of supporting cells and hair cells for basic research and potential therapeutic solutions to hearing loss.”

Karp, Langer, and Yin are also working on applying this approach to other types of cells, including types of intestinal cells involved in insulin regulation and control of the gut microbiota.

The research was funded by the National Institutes of Health, the European Commission, the Harvard-MIT IDEA2 Award, the Shulsky Foundation, and Robert Boucai. 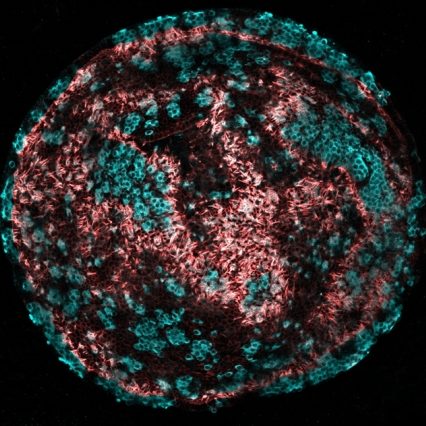