The European Cooperation in Science and Technology (COST) is an intergovernmental organization, with 36 member-states from across Europe. It has accumulated more than 45 years of experience of creating open networks in all scientific fields and often across scientific disciplines.

Within the COST networks knowledge is freely shared among all types of specialists using bottom-up principles. COST has long been, and remains, the largest framework for transnational coordination in science and technology across Europe. In total, nearly half a million researchers have participated in COST over the years.

COST works through the so called COST Actions: networks of researchers, technologists and other interested parties, all focusing in a particular area and collaborating across borders. A COST Action funds conferences, workshops, short-term scientific missions, training schools, publications and other communications tools to link the participants together for a period of over four years. It must include participants from at least seven COST member-states.

As of 2016, there are more than 300 different COST Actions going on, involving about 45,000 researchers. The topics are hugely diverse and very targeted. For instance, there are currently Actions relating to medical research (as the one for protein analysis through mass spectroscopy), ; the study of climate change (tracking water vapour in the atmosphere with GPS satellites); basic research on ageing (involving the development of new transgenic mouse strains); public policy (construction of databases for comparing local-government reforms); or to study how paroled criminal offenders are supervised in the community.

COST has proven to be a valuable networking mechanism in Europe building trust and cooperation with, and within, scientific communities in Europe and beyond. We therefore invite you to explore the user-friendly COST networking platforms and identify opportunities to collaborate and access new knowledge and know-how with a modest budget. http://www.cost.eu 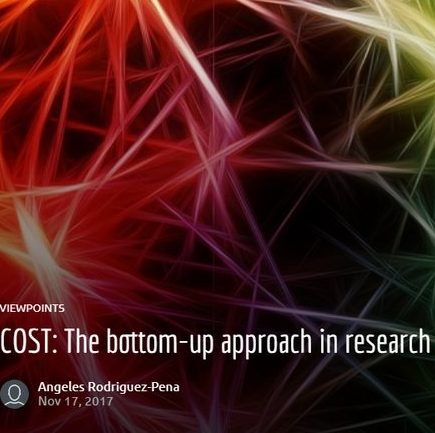