The family of RAF kinases transduces extracellular information to the nucleus, and their activation is crucial for cellular regulation on many levels, ranging from embryonic development to carcinogenesis. B-RAF and C-RAF modulate neurogenesis and neuritogenesis during chicken inner ear development. C-RAF deficiency in humans is associated with deafness in the rare genetic insulin-like growth factor 1 (IGF-1), Noonan and Leopard syndromes. In this study, we show that RAF kinases are expressed in the developing inner ear and in adult mouse cochlea. A homozygous C-Raf deletion in mice caused profound deafness with no evident cellular aberrations except for a remarkable reduction of the K+ channel Kir4.1 expression, a trait that suffices as a cause of deafness. To explore the role of C-Raf in cellular protection and repair, heterozygous C-Raf +/− mice were exposed to noise. A reduced C-RAF level negatively affected hearing preservation in response to noise through mechanisms involving the activation of JNK and an exacerbated apoptotic response. Taken together, these results strongly support a role for C-RAF in hearing protection. 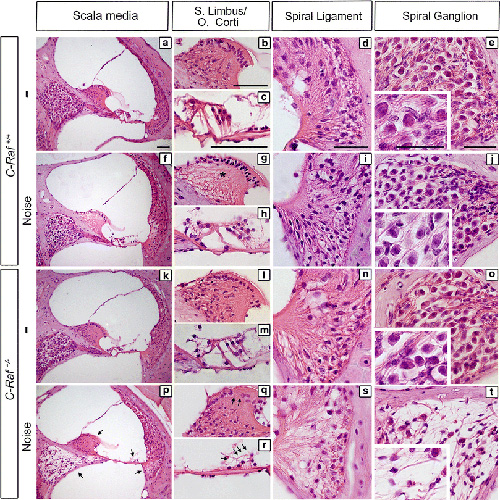