News & Events
May 19, 2015
Breakthrough in tinnitus research could lead to testable model

A major breakthrough has been made that provides new insights into how tinnitus, and the often co-occurring hyperacusis, might develop and be sustained

Tinnitus is largely a mystery, a phantom sound heard in the absence of actual sound. Tinnitus patients “hear” ringing, buzzing or hissing in their ears much like an amputee might “feel” pain in a missing limb. It is a symptom, not a disease, and though exposure to loud noise may cause it, some cases have no apparent trigger.

Existing treatments, meantime, are unreliable, either not working at all or varying greatly in effectiveness for those who report some relief.

But a global research effort involving investigators from the University at Buffalo; Southeast University in Nanjing, China; and Dalhousie University in Nova Scotia, Canada, have made a major breakthrough that provides new insights into how tinnitus, and the often co-occurring hyperacusis, a condition that causes sounds to be perceived as intolerably loud, might develop and be sustained.

The results of the study, to be published in a forthcoming edition of eLife, suggest the neural network responsible is more expansive than previously thought. The findings could lead to a testable model that helps to identify what region or regions of the brain might be responsible for causing the two conditions.

Having conceptualized a broader, more comprehensive neural network, the researchers hope to eventually test the model by deactivating specific segments of the neural network. By process of elimination they would learn if shutting down one part of that network relieves tinnitus, hyperacusis or both conditions.

Until the mid-1990s, tinnitus was thought to be centered in the ear, but patients who lost their hearing on one side after a surgical tumor removal unrelated to the condition reported still hearing a ringing — in their deaf ear.

Though it’s not known yet exactly where and how tinnitus occurs in the brain, Salvi says their functional MRI studies show the abnormal activity underlying tinnitus and hyperacusis isn’t confined to a specific brain location, but actually involves a neural network.

Unlike traditional MRIs, which show only structure, functional MRIs show what parts of the structure are active at a given time while functional connectivity MRI reveals how one part of the brain interacts with other regions, much like partners would interact on a dance floor, explains Yu-Chen Chen, a radiologist at Southeast University and one of the study’s co-authors.

The researchers induced tinnitus in rats by administering the active ingredient in aspirin, which has long been known to produce tinnitus and hyperacusis symptoms in humans.

“Certain brain regions become very active once tinnitus is induced, much more so than it is for an animal with normal hearing,” says Salvi. “Even though high-dose aspirin induces a hearing loss and less information is being sent from the ear to the brain as a result, the brain responds with greater activity. It’s paradoxical, like a car getting better gas mileage with a less efficient engine.”

Tracing the network’s course, the investigators identified a major hub within the central auditory pathway, the sound processing center of the brain.

“Other research has shown this activity, but what is novel about the current study is the amygdala pops up. This is the part of the brain that assigns emotion to our perceptions,” says Salvi. “Many patients report the onset of tinnitus after experiencing significant stress or anxiety. We think it’s not just the hearing loss that’s essential. There are other emotional factors working together with the auditory factors.”

The reticular formation, an arousal center involved in the “fight or flight” response is active too, plus the hippocampus, the memory region of the brain that helps identify where things are located, such as the location of the phantom sound. So the auditory system is connecting sound to a location, the ear in this case. There is emotion and arousal, but the final puzzling piece to the network is activity in the cerebellum, normally activated during motor planning events like reaching for a cup or catching a ball.

“We were shocked when this part of the brain popped up,” says Salvi. “Almost all parts of the network can be explained: location of sound; the emotional attachment; why people get aroused when they have tinnitus; we’re puzzled by the cerebellum involvement, but it might act like some kind of “gate” that’s allowing the phantom sound to enter the consciousness,” says Salvi.

The above story is based on materials provided by University at Buffalo. The original article was written by Bert Gambini. Note: Materials may be edited for content and length. 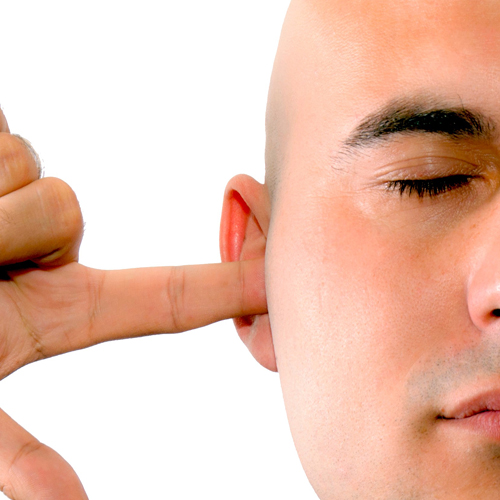