Firearms pose a particular risk to our hearing. But just 59% of the 35 million U.S. gun users represented in a study wear hearing protection all the time.

With firearms, the researchers found that one in five people in the US who shot more than 10,000 rounds of ammunition in the past year never used hearing protection. Most of the firearm-related noise exposure came during recreational shooting.

“The problem here is both the number of people using firearms and the potential noise-inducing hearing loss from the repeated gunfire,” said senior study author Dr. Neil Bhattacharyya of Harvard Medical School and Brigham and Women’s Hospital in Boston.

“A rifle has an extremely loud single burst of sound and if you are firing hundreds of rounds, that can be very damaging, particularly without hearing protection,” Bhattacharyya explained to Reuters.

The study also examined noise from other leisure and work activities such as lawn mowing. Roughly one in five in the data were exposed to loud sounds outside of work and 62% of did not use hearing protection, the researchers reported. At work only one-third used hearing protection.

To assess how often U.S. adults are exposed to loud noise and how regularly they take steps to protect against hearing loss, the researchers examined 2014 survey data representing 240 million people.

The Study “Epidemiology of firearm and other noise exposures in the United States” was published in The Laryngoscope in 2017. 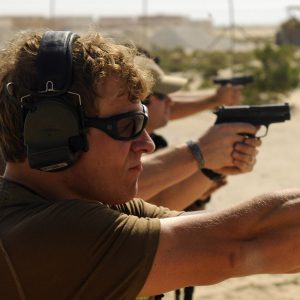